Attribute framing presents an ethically sound approach for reducing adverse nocebo effects. In past studies, however, attribute framing has not always decreased nocebo effects. The present study used a sham tDCS procedure to induce nocebo headaches to explore factors that may contribute to the efficacy of attribute framing. Participants (N = 174) were randomized to one of three between-subject conditions: a no-headache instruction (control) condition and two conditions in which headaches were described as either 70% likely (negative framing) to occur or 30% unlikely (positive framing) to occur. Results revealed nocebo headaches in both framing conditions, as compared to the control condition. Attribute framing did not influence headache measures recorded during the sham tDCS task, but framing did have a modest influence on one of two headache items completed after the task. Results suggest that attribute framing could have a stronger influence on delayed nocebo effect measures or retrospective symptom reports; a finding that may explain inconsistencies in the existing framing-nocebo effect literature. Exploratory analyses also revealed that low negative affect was associated with stronger nocebo and attribute framing effects, although these effects were found on only a few headache measures. It is concluded that researchers should further investigate the influence of attribute framing on nocebo headaches as a function of both timing and emotional factors.
vorige artikel Association between having a regular healthcare provider and pre-exposure prophylaxis use among men who have sex with men: a cross-sectional survey
volgende artikel How acute affect dynamics impact longitudinal changes in physical activity among children 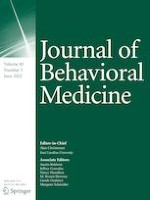 Affect regulation as a moderator of intentions for breast cancer chemoprevention