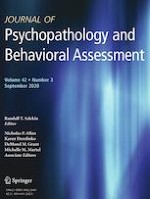 Parental Attributions, Parenting Skills, and Readiness for Treatment in Parents of Children with Disruptive Behavior