Anxiety and sensory symptoms are highly prevalent and meaningful in the daily lives of individuals with autism spectrum disorder (ASD). Despite the importance of carefully measuring, researching, and treating these symptoms, current methods in ASD seldom include self-report. This study investigated the consistency of adolescent and parent reports of anxiety and auditory sensitivity in individuals with ASD, and examined their validity via comparisons with sympathetic arousal at baseline and in response to an auditory challenge. Fifty adolescent-parent dyads (n = 26 ASD, n = 24 typically developing; 12–16 years old; IQ>80) completed parallel versions of both anxiety and auditory hypersensitivity scales, which were compared to heart rate collected at rest and during an aversive noise task. Adolescents with ASD exhibited greater anxiety and auditory hypersensitivity than their peers, based on both self and parent report. Across groups, self-report was higher than parent report. In individuals with ASD, a significant relationship was found between self-reported anxiety and autonomic arousal at rest, and between self-reported auditory sensitivity and autonomic reactivity during the noise task. These relationships were not significant for parent-report. These findings extend past work by demonstrating greater self-reported (than parent-reported) anxiety and sensory symptoms. Furthermore, the presence of significant correlations between self-reported symptoms and sympathetic arousal supports the validity of self-report in adolescents with ASD with average or above average cognitive abilities. This indicates that adolescents with ASD have a unique perspective on their internal experience, which can complement parent reports and provide a more comprehensive assessment of symptoms in research and clinical settings.
vorige artikel A Phenotype of Childhood Autism Is Associated with Preexisting Maternal Anxiety and Depression 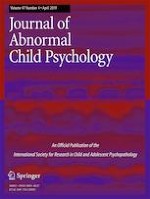 Sensitivity to Peer Feedback in Young Adolescents with Symptoms of ADHD: Examination of Neurophysiological and Self-Report Measures