Cognitive control training (CCT) uses computer-based exercises to increase prefrontal cortex activation. Recent studies have found that depressed participants who received CCT significantly reduce their negative affect and rumination, and improve focus and concentration (Siegle et al. in Cogn Ther Res 31:235–262, 2007; Calkins et al. 2011). These promising findings raise questions about the degree to which this intervention may have use in other disorders; specifically, can CCT reduce the inflexible thinking characteristic of individuals with OCD? In the present study, we assessed the efficacy of three sessions of CCT, relative to a control intervention, on obsessive–compulsive (OC) symptoms in a community sample of individuals selected on the basis of elevated scores on the OCI-R. We hypothesized that those in the CCT condition would report a greater reduction in OC symptoms than those in the control condition. Additionally we assessed the ability to disengage from unattainable goals by using an unsolvable anagram task. To target the intervention to OC rather than mood symptoms, we excluded participants with elevated depression scores. Forty-eight participants (28 female, mean age 28.9 years) meeting eligibility criteria were randomized to receive three sessions of CCT or the control intervention (a computerized visual task) over a 2-week period. Following training, we did not find a significant difference between groups on OCI-R scores, indicating that this application of CCT was ineffective in meaningfully reducing OC symptoms (d = 0.27). Significant differences were found for affect ratings between groups, with participants in the CCT group showing larger decreases (d = 0.62) in negative affect scores across the three sessions of training. Hence, the CCT intervention may be more specific to mood than a direct modulator of cognitive inflexibility. Examination of the effects of additional sessions of CCT or CCT as an augmentation to exposure therapy remains to be investigated.
vorige artikel How Do People Perceive the Disclosure of Emotion?
volgende artikel Development of an Inventory to Measure Specific Phobia of Vomiting (Emetophobia) 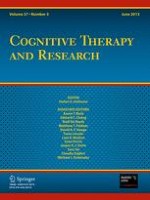 How Do People Perceive the Disclosure of Emotion?

The Effects of Attention Training on the Perception of Bodily Sensations in Patients with Hypochondriasis: A Randomized Controlled Pilot Trial