Researchers who study the association between religiousness or spirituality (R/S) and distress do so because they are interested in causal relationships. This interest was also the starting point for the study of Mills et al. ( 2015), recently published in this Journal. They state in their Introduction that “R/S wellness is of increasing interest in the medical literature and may protect against depressive symptoms”, which suggests causality. We do not understand why the authors used the concept of spiritual wellbeing (SWB) to predict wellbeing, given the warnings against this practice in several earlier publications (Koenig, 2008; Visser et al., 2010; Migdal & MacDonald, 2013). …
vorige artikel Authors’ response 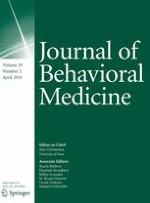 Perceived size of friends and weight evaluation among low-income adolescents

The interrelations between spiritual well-being, pain interference and depressive symptoms in patients with multiple sclerosis