» Toegang tot de volledige tekst krijgen
Belangrijke opmerkingen
This research was supported by a Research Grant from the Swiss National Science Foundation # PP00P1_150486. We are grateful to Lisa Heid and Sarah Dubach for their support with data collection.

The current study investigated whether children’s mental representations of numbers are organized spatially at the onset of formal schooling using a manual-pointing task. First-graders (N = 77) saw four numbers (1, 3, 7, 9) presented randomly in four spatial positions (extreme left, left, right, extreme right) on a touch screen. In a Go/No-Go task, children were asked to press the appearing numbers as fast and accurately as possible, but only when the numbers were “smaller” (or “larger” in a different block) than 5. Results indicated that response times were significantly affected by the spatial position in which the different numbers were presented. Response times for small numbers (1 and 3) increased and response times for large numbers (7 and 9) decreased, the more they were presented towards the right side of the screen. These findings suggested that first-graders spontaneously employed a spatial number representation that was oriented from left to right. Furthermore, this left-to-right organization could not be easily changed by priming a different direction. Our findings indicate that even young children map numbers continuously onto space. 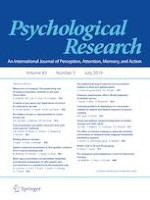 Whose turn is it anyway? The moderating role of response-execution certainty on the joint Simon effect

Putting emotions in routes: the influence of emotionally laden landmarks on spatial memory

The exogenous and endogenous control of attentional focusing