The relationship between smoking and illness perceptions among congenital heart disease (CHD) survivors is unknown. The primary aims of the present study were to compare the smoking prevalence among CHD survivors to a nationally representative U.S. sample and examine the relationship between smoking and illness perceptions. CHD survivors (N = 744) from six U.S. sites participated in the study. The smoking prevalence among CHD survivors (9.3%) was lower than the general population (15.3%). However, 23.3% of CHD survivors with severe functional limitations smoked. Smoking prevalence differed by U.S. region, with a greater proportion of those attending CHD care in the Midwest reporting smoking (11.8%). The illness perception dimensions of Concern and Emotional Response were independently associated with smoking. Differences in illness perceptions enhance our understanding of smoking among CHD survivors and may guide interventions promoting positive health behaviors. The protocol for the study from which the present analyses were conducted was recorded at ClinicalTrials.gov: NCT02150603.
vorige artikel Anticipatory racism stress, smoking and disease activity: the Black women’s experiences living with lupus (BeWELL) study
volgende artikel Factors associated with barriers to engagement in HIV-prevention care among sexual minority men 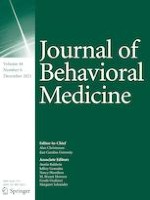 Exercise as a smoking cessation treatment for women: a randomized controlled trial

Firearm purchasing during the beginning of the COVID-19 pandemic in households with teens: a national study