Implementation science approaches the challenges of translating evidence into practice as a matter of scientific inquiry. This conceptual paper uses an implementation science lens to examine the ways in which evidence from health professions education research is brought to bear on decision-making. The authors describe different decision-making contexts and the kinds of evidence they consider, and from this, they outline ways in which research findings might be better presented to support their translation into policy and practice. Reflecting on the nature of decision-making in health professions education and how decisions are made and then implemented in different health professions education contexts, the authors argue that researchers should align their work with the decision-making contexts that are most likely to make use of them. These recommendations reflect implementation science principles of packaging and disseminating evidence in ways that are meaningful for key stakeholders, that stem from co-creation of knowledge, that require or result in meaningful partnerships, and that are context specific and relevant.
Extras
Table 1 Application of integrated implementation approaches to three aspects of decision-making (DM) in HPE
Opmerkingen

Levels and forms of decision-making in HPE

HPE programs typically have an intricate model of management and governance, both within the program and in relation to regulators and other external stakeholders [12]. For instance, curriculum committees may focus on what is taught, when it is taught, and by whom, while a visiting accreditation team may focus on gaps and discrepancies in the reporting and management of a program overall. Not only does this mean that different decisions tend to take place at different levels (i.e., individual teacher, colleague, course, program, organization, regulation, society), who is involved in decision-making, the scope of the decisions that can be made (i.e., individual, social, tactical, strategic, managerial, regulatory, sociopolitical), and how those decisions are made (i.e., committee, individual leader autonomy, workshops) can vary significantly between these levels.
To better understand this variation, we have outlined a continuum of different levels of decision-making in HPE in Tab. 1. At one end of the continuum, individual teachers typically have little say over the syllabus, curriculum, or policy as these are determined at the program level, but they typically have latitude to select or adjust their approaches to teaching and, to a lesser extent, assessment. At the other end of the continuum, regulators, professional bodies, funders, and society at large tend to have little direct influence on day-to-day teaching, but nevertheless define the broad context for educational practices and outcomes. Within this continuum there are typically several levels of decision-makers and decision-making.
Table 1
An outline of the continuum of decision-making levels in health professions education with examples of the scope and drivers for decision-making processes at different levels
We can expand on this decision-making continuum by mapping out the kinds of decisions that tend to be made at different levels and the decision-making entities that are tasked with them. While specifics will likely differ between programs and systems, if researchers want to influence what is taught then, at least in integrated HPE programs, their evidence needs to influence course and program level decision-making. On the other hand, if they want to influence how the syllabus is taught, then their evidence might be better aimed at influencing individual teachers. Researchers seeking other kinds of impacts should be thinking about the decision-making processes relevant to their interests. In arguing that researchers should link their evidence to the kinds of decision-making processes in HPE that allow for its translation to practice, we have six recommendations for researchers seeking to effect or influence educational change. Our first two recommendations are that researchers:
1.
Make explicit the kinds of changes they seek to bring about through the evidence they present (e.g., change instructional or assessment strategies, change policy).
2.
Seek to understand how their desired changes relate to decision-making, and from this, to present their evidence in ways that can influence decision-makers at these critical levels.
We are not just proposing a linear mapping of evidence to the contexts in which it is hoped it will be influential. HPE systems tend to be ‘panarchic’ in that they involve different levels and rates of change [15]. Larger and slower levels of change (such as meeting accreditation standards or undertaking extensive curriculum change) set the conditions for smaller and faster levels (such as day-to-day teaching practice); at the same time, smaller levels (such as changing instructional strategies) can impact larger levels (such as the quality of the health professional workforce). These panarchic interactions and dependencies between decision-making levels also need to be considered. For example, higher-level HPE decisions (i.e., those from or informed by regulators, funders, professions, and society as a whole) might be expected to translate down through various levels of decision-making. However, it is more than likely that decision-making at these different levels may well reinterpret, rewrite, disregard, or dilute the original intent of these top-down directions [16].
Thus, while evidence may influence higher levels of decision-making, its translation to the day-to-day operations of HPE may be lossy. Implementation is not simply an issue of moving from ‘bench to bedside’, it is also a matter of translation between different levels of decision-making in HPE. We therefore recommend that researchers:
3.
Understand the decision-making pathway(s) between the level(s) at which the decisions the evidence is intended to influence are made, and the level(s) at which these decisions will be enacted.
4.
Consider how their evidence can be presented in ways that can relate to both ends of this decision-making spectrum: to decision-makers and to those implementing the decisions.

Evidence and context in decision-making in HPE

Decision-making is inescapably context-bound, in that context shapes both the decision-making processes and the decisions that are made [17]. To that end, it is important to consider the influence of context (e.g., available resources, organizational culture, values of various stakeholders) on decision-making and on how evidence might be best (or at least better) articulated to effect change in different contexts. This might involve providing a clear and nuanced description of the context(s) in which the evidence was generated, or it might mean researchers provide vignettes of how their recommendations might be implemented in different contexts. Although all contexts are to some extent unique, we can model recurring contextual patterns to inform how evidence might be better aligned with them [18].
As an example of this, we have outlined three broad contextual patterns that can shape decision-making contexts in HPE. The first pattern focuses on the individuals responsible for the kind of change a particular piece of evidence is seeking to influence, and the kinds of decision-making processes and structures they use. For example, as we described earlier, does the evidence seek to influence policy (in which case decision-making might take place in committees) or classroom practices (in which case decision-making is more likely to lie with individual teachers)? The second pattern focuses on the cultural contexts within which change is to be affected, and whether those the evidence is seeking to influence see it as legitimate, important, and more reflective of their values and expectations. For example, one program may have a cultural disposition to resist any change (e.g., because of a will to preserve institutional values, or lack of trust between stakeholders) while another may seek to pursue change wherever possible (e.g., to demonstrate their relevance to the zeitgeist, or to improve their reputation or competitiveness). The third pattern focuses on the resources that can influence decision-making, such as the presence or lack of money, time, skills, experience, or opportunity. Evidence might be presented in ways that consider whether a proposed change or innovation is feasible in settings where money or expertise is relatively limited. Based on this, our fifth recommendation is that researchers:
5.
Reflect on the different contexts in which their work seeks to have influence, and be mindful of how the structures, cultures, and resources in those contexts might create barriers or opportunities to their engagement with the evidence and what it has to offer.

Factors that compete with research evidence in HPE

It is unfortunate that scientific evidence seldom drives decision-making in HPE [19, 20]. The reasons for this are many, but include: a perception that available evidence is of a poor quality or irrelevant; the time and effort required to access and read academic papers and extract key points; a general resistance to change; and competing priorities [19, 20]. Indeed, evidence in the form of academic publications and presentations often vies for attention with other sources of evidence. For instance, research evidence might conflict with locally generated evidence (e.g., student evaluations or accreditation results), or the opinions of different decision-makers. This is not to say that formal evidence is undervalued, rather that scientific evidence is often seen as “would be nice to consider” rather than “it must be prioritized”. In cases of competing views on the nature and the relevance of evidence, researchers must present their evidence in ways that engage with the contested and deliberative nature of HPE decision making.
We can therefore understand all decision-making in HPE as being, to some extent, contested and political. This is more likely at higher decision-making levels given the higher stakes and the wider range of competing interests, perspectives, and drivers at play. Given that decision-making in HPE often involves negotiation and compromise between different drivers and interest groups [21], our sixth recommendation is that researchers:
6.
Consider how their evidence might compete with or be in conflict with other decision-making drivers or priorities. This could involve a discussion of what compromises may or may not be acceptable in implementing the evidence, or it might involve providing examples of different implementation scenarios illustrating these points. Indeed, clarification over which elements are essential and which are negotiable is a critical concern in implementation of educational innovations in general [22].

AT would like to acknowledge the Fonds de Recherche du Québec-Santé for her Junior 2 Research Scholar Award.

A. Thomas and R.H. Ellaway declare that they have no competing interests.
Open Access This article is licensed under a Creative Commons Attribution 4.0 International License, which permits use, sharing, adaptation, distribution and reproduction in any medium or format, as long as you give appropriate credit to the original author(s) and the source, provide a link to the Creative Commons licence, and indicate if changes were made. The images or other third party material in this article are included in the article’s Creative Commons licence, unless indicated otherwise in a credit line to the material. If material is not included in the article’s Creative Commons licence and your intended use is not permitted by statutory regulation or exceeds the permitted use, you will need to obtain permission directly from the copyright holder. To view a copy of this licence, visit http://​creativecommons.​org/​licenses/​by/​4.​0/​.
vorige artikel Excellence in medical training: developing talent—not sorting it
volgende artikel Engagement and learning in an electronic spaced repetition curriculum companion for a paediatrics academic half-day curriculum
insite
INHOUD
share
DELEN 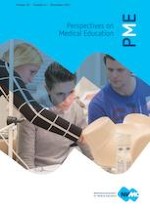 Caring from behind the face mask in healthcare: Learning from the dramatic arts

The contribution of simulated patients to meaningful student learning