A three-factor structure was found: Lower extremity dysfunction, Upper extremity dysfunction, and Daily life consequences. This structure was different for patients with LEF versus UEF. ICCs ranged from .68 to .90, and α varied from .81 to .95. The correlations between the SMFA and, respectively, the RAND-36 and WHOQOL-BREF were small to large depending on the SMFA factor combined with fracture location. Responsiveness was confirmed (p < .0001; SRM ranging from .28 to 1.71).

The SMFA has good psychometric properties in patients with fractures. Patients with UEF and LEF could not be regarded as a homogenous group. The development of separate SMFA modules should be considered. 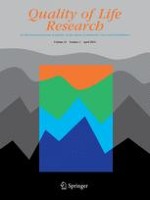 Qualitative development of the ‘Questionnaire on Pain caused by Spasticity (QPS),’ a pediatric patient‐reported outcome for spasticity‐related pain in cerebral palsy

The impact of severe preeclampsia on maternal quality of life