Research on the consequences of child maltreatment has primarily focused on behavior and mental health; the children’s overall well-being has not received the same attention. A number of studies have investigated health-related quality of life (HRQoL) among victims of child maltreatment, but there is still a lack of knowledge about predictors of HRQoL in maltreated children and adolescents. This study seeks to bridge the gap by drawing data from the German multi-site study Child Abuse and Neglect Case-Management (CANMANAGE).

Parents or caregivers of 350 children and adolescents completed a proxy version of the Kidscreen-10-Index, a multidimensional instrument measuring child HRQoL. An additional 249 children age 8 years and older completed a self-report version. Multiple regression analyses were performed to identify potential predictors for both self- and proxy-rated HRQoL.

It is important to treat PTSS and emotional and behavioral symptoms in maltreated children, as these two phenomena are strong cross-sectional predictors of a child’s HRQoL. Trauma-focused cognitive behavioral therapies are one possible option to address the needs of such children.
vorige artikel The impact of older person’s frailty on the care-related quality of life of their informal caregiver over time: results from the TOPICS-MDS project
volgende artikel Comparison of good days and sick days of school-age children with cancer reflected through their drawings 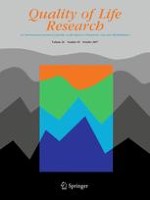 Associations between illness duration and health-related quality of life in specified mental and physical chronic health conditions: results from a population-based survey

Recovering from chronic myeloid leukemia: the patients’ perspective seen through the lens of narrative medicine