Quality of life (QoL) decreases in very old age, and is strongly related to health outcomes and mortality. Understanding the predictors of QoL and change in QoL amongst the oldest old may suggest potential targets for intervention. This study investigated change in QoL from age 79 to 90 years in a group of older adults in Scotland, and identified potential predictors of that change.

Mean QoL declined from age 79 to 90. Participants returning at 90 had scored significantly higher at 79 on most QoL measures, and exhibited better objective health and functional ability, and lower anxiety and depression than non-returners. Hierarchical multiple regression models accounted for 20.3–56.3% of the variance in QoL at age 90. Baseline QoL was the strongest predictor of domain scores (20.3–35.6% variance explained), suggesting that individual differences in QoL judgements remain largely stable. Additional predictors varied by the QoL domain and included self-rated health, loneliness, and functional and mood decline between age 79 and 90 years.

This study has identified potential targets for interventions to improve QoL in the oldest old. Further research should address causal pathways between QoL and functional and mood decline, perceived health and loneliness. 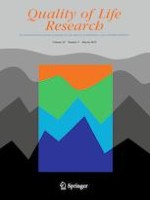