An essential step to wide-scale dissemination is to investigate moderators of intervention effectiveness. This study examined moderators of the effects of a universal school-based mindfulness program on adolescents’ depressive symptoms. Based on theory and previous research, we identified the following potential moderators: (1) severity of symptoms of depression at baseline, (2) gender, (3) age, and (4) school track. The study uses a pooled dataset from two consecutive randomized controlled trials in adolescents (13–18 years) in secondary schools in Belgium. Results on effectiveness based on the first trial were published in this journal (Raes et al. 2014). A second consecutive trial was conducted to obtain a more equal distribution between school tracks and to enlarge power, yielding a total of 605 students from nine schools. In each school, parallel classes were randomized to the mindfulness condition or usual curriculum control condition. Data were collected 1 week before and 1 week after delivery of the training and at 6-month follow-up. Moderation was tested longitudinally with multilevel models across the three repeated measures and across condition. We found no moderation effects of gender, age, and school track. Six months after the training, we found a marginally significant moderation effect for severity of symptoms of depression at baseline with greater decrease in symptoms for students with high levels of depression. The general absence of differential intervention effects for gender, age, and school track supports the broad scope of the school-based mindfulness group intervention.
vorige artikel Mindless Suffering: the Relationship Between Mindfulness and Non-Suicidal Self-Injury
volgende artikel Development and Psychometric Evaluation of the Body Mindfulness Questionnaire 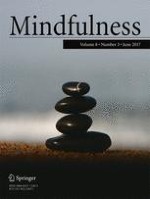 The Shape of Change in Perceived Stress, Negative Affect, and Stress Sensitivity During Mindfulness-Based Stress Reduction

Mindfulness-Based Therapies for Sexual Dysfunction: a Review of Potential Theory-Based Mechanisms of Change