A large body of research suggests that children with ADHD tend to overestimate their functioning across multiple domains. This overestimation, termed a positive illusory bias (PIB), is most often examined in controlled research settings in which child ratings are compared to ratings from an adult. We sought to advance our understanding of how a PIB presents in daily life for children with ADHD by using mixed methodology to assess mothers’ (N = 12) perceptions of their child’s self-awareness. Information was gathered from mothers of children with ADHD using surveys and an interview protocol. A grounded theory approach was used to identify themes that emerged through interview data and discrepancy methodology to confirm the presence of the PIB. Qualitative and quantitative data suggested that children with ADHD displayed limited self-awareness, with mothers reporting overestimation of competence across domains. However, some children were reported to be aware of their areas of difficulty, with variability in self-awareness based on domain, feedback, and setting. Mothers reported that children responded to evidence of their impairment both with apathy and frustration. Results help to clarify past evidence of heterogeneity in PIB levels and provide examples of how limited self-awareness and denial of difficulties are manifested in the family context for children with ADHD, according to mother’s observations. These results demonstrate the value of using mixed methodology to better understand the self-perceptions of children with ADHD in their daily lives. 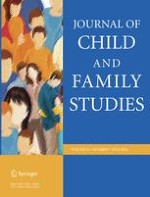 Correction to: Parents’ Planning for Physical Activity for their Pre-School Aged Children: The Role of Psycho-Social Mediators and Moderators

The Double Bind of Siblings in Adolescent Substance Abuse Treatment