The application of cognitive load theory to workplace-based activities such as patient handovers is hindered by the absence of a measure of the different load types. This exploratory study tests a method for measuring cognitive load during handovers.

The authors developed the Cognitive Load Inventory for Handoffs (CLI4H) with items for intrinsic, extraneous, and germane load. Medical students completed the measure after participating in a simulated handover. Exploratory factor and correlation analyses were performed to collect evidence for validity. 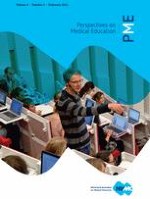 The need for logbooks to evolve in the undergraduate medical setting