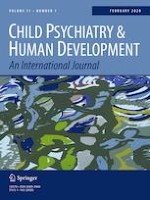 What Differentiates Children with ADHD Symptoms Who Do and Do Not Receive a Formal Diagnosis? Results from a Prospective Longitudinal Cohort Study