Transcatheter aortic valve replacement (TAVR) is increasingly being used as an alternative to conventional surgical valve replacement. Prosthetic valve endocarditis (PVE) is a rare but feared complication after TAVR, with reported first-year incidences varying from 0.57 to 3.1%. This study was performed to gain insight into the incidence and outcome of PVE after TAVR in the Netherlands.

A multicentre retrospective registry study was performed. All patients who underwent TAVR in the period 2010–2017 were screened for the diagnosis of infective endocarditis in the insurance database and checked for the presence of PVE before analysis of general characteristics, PVE parameters and outcome.

A total of 3968 patients who underwent TAVR were screened for PVE. During a median follow-up of 33.5 months (interquartile range (IQR) 22.8–45.8), 16 patients suffered from PVE (0.4%), with a median time to onset of 177 days (IQR 67.8–721.3). First-year incidence was 0.24%, and the overall incidence rate was 0.14 events per 1000 person-years. Overall mortality during follow-up in our study was 31%, of which 25% occurred in hospital. All patients were treated conservatively with intravenous antibiotics alone, and none underwent a re-intervention. Other complications of PVE occurred in 5 patients (31%) and included aortic abscess (2), decompensated heart failure (2) and cerebral embolisation (1).

PVE in patients receiving TAVR is a relatively rare complication and has a high mortality rate. 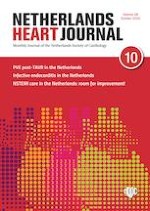 Reply to the letter of Soliman et al. regarding ‘Randomised comparison of a balloon-expandable and self-expandable valve with quantitative assessment of aortic regurgitation using magnetic resonance imaging’

Non-ST-elevation myocardial infarction in the Netherlands: room for improvement!