In this review, a conceptualization of oppositional defiant (ODD) and conduct disorder (CD) is presented according to which social learning processes in these disorders are affected by neurocognitive dysfunctions. Neurobiological studies in ODD and CD suggest that the ability to make associations between behaviors and negative and positive consequences is compromised in children and adolescents with these disorders due to reduced sensitivity to punishment and to reward. As a result, both learning of appropriate behavior and learning to refrain from inappropriate behavior may be affected. Likewise, problem solving is impaired due to deficiencies in inhibition, attention, cognitive flexibility, and decision making. Consequently, children and adolescents with ODD and CD may have difficulty learning to optimize their behavior in changeable environments. This conceptualization of ODD and CD is relevant for the improvement of the effect of psychological treatments. Behavioral and cognitive-behavioral interventions that have been shown to be modestly effective in ODD and CD are based on social learning. Limited effectiveness of these interventions may be caused by difficulties in social learning in children and adolescents with ODD and CD. However, although these impairments have been observed at a group level, the deficits in reward processing, punishment processing, and cognitive control mentioned above may not be present to the same extent in each individual with ODD and CD. Therefore, the neurocognitive characteristics in children and adolescents with ODD and CD should be assessed individually. Thus, instead of delivering interventions in a standardized way, these programs may benefit from an individualized approach that depends on the weaknesses and strengths of the neurocognitive characteristics of the child and the adolescent.
vorige artikel Does Long-Term Medication Use Improve the Academic Outcomes of Youth with Attention-Deficit/Hyperactivity Disorder?
volgende artikel Parent and Family Impact of Autism Spectrum Disorders: A Review and Proposed Model for Intervention Evaluation 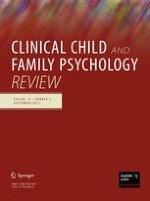 Health-Related Quality of Life in Children and Adolescents Following Traumatic Injury: A Review

Does Long-Term Medication Use Improve the Academic Outcomes of Youth with Attention-Deficit/Hyperactivity Disorder?

Parent and Family Impact of Autism Spectrum Disorders: A Review and Proposed Model for Intervention Evaluation