This prospective investigation sought to discriminate children who were both aggressive towards and victimized by peers in the first grade, from those who were only aggressive, only victimized, or neither (i.e., socially adjusted), using early child and family risk factors. Two hundred thirty-eight children, their mothers, and teachers participated in a longitudinal study since birth. All three aggressor/victim subgroups showed greater temperamental dysregulation than the socially adjusted children, but only aggressive victims had significantly poorer social perception skills. Aggressive victims were distinguished from aggressors by greater exposure to maternal depression and from victims by lower levels of early inhibition, but they shared the experiences of negative family emotional expressiveness with aggressors and greater mother-child negativity with victims. The identification of early risk factors is crucial to prevention and early intervention efforts that have the potential to attenuate the long term emotional, social, and academic problems associated with aggressive victim status.
vorige artikel Maternal Modeling and the Acquisition of Fear and Avoidance in Toddlers: Influence of Stimulus Preparedness and Child Temperament
volgende artikel Current and Past Maternal Depression, Maternal Interaction Behaviors, and Children’s Externalizing and Internalizing Symptoms 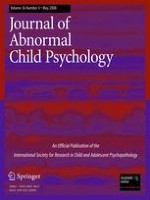 Maternal Modeling and the Acquisition of Fear and Avoidance in Toddlers: Influence of Stimulus Preparedness and Child Temperament

Peer Perceptions and Liking of Children with Anxiety Disorders