This study compared inhibitory functioning among ADHD subtype groups on manual and visual versions of the stop task. Seventy-six children, identified as ADHD/I (n = 17), ADHD/C (n = 43), and comparison (n = 20) completed both tasks. Results indicated that both ADHD groups were slower to inhibit responses than the comparison group on both tasks. Comparison children were faster to inhibit than activate responses on both tasks. Children in the ADHD groups also demonstrated this robust pattern on the manual task. However, on the visual task, the ADHD groups evidenced slowed inhibition comparable to the time required to activate responding. This implies that the visual task is more sensitive than the manual task to inhibitory deficits associated with ADHD. The ADHD/I and the ADHD/C groups did not differ on most measures, suggesting that neither stop task is effective in differentiating the subtypes. These findings extend work highlighting the role of disinhibition in ADHD, and contrast recent work suggesting divergence between ADHD subtypes. 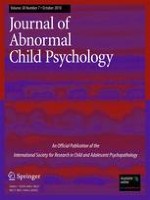 Attachment and Autism: Parental Attachment Representations and Relational Behaviors in the Parent-Child Dyad