Dysfunctional Attitudes as a Mediator in the Association Between Problematic Internet Use and Depression, Anxiety, and Stress | mijn-bsl Skip to main content
ZOEKEN MENU 1 2 3 4

The aim of this study was to describe the mediating role of dysfunctional attitudes in the association between problematic internet use and general distress. The study was performed based on the correlational design. It included 543 university students (69.6% female, n = 378; 28.4% male, n = 154, 2% gender not stated, n = 11). The ages of university students participating in this cross-sectional study varied from 17 to 28 years and mean age was 18.49 years (SD = 1.06). Data were collected with the Problematic Internet Use Scale, Dysfunctional Attitudes Scale, Depression Anxiety and Stress Scale (DASS-42) and a personal information form. Research findings showed significant correlations between variables. According to mediation analysis results, dysfunctional attitudes were determined to have a partial mediating role in the association between problematic internet use and depression and anxiety. Additionally, dysfunctional attitudes were found to have a fully mediating role in the association between problematic internet use and stress. When generally assessed, the indirect effects of problematic internet use on general distress were found to be significant. The research findings are considered to be beneficial for experts in both clinical and education environments. The findings were discussed in line with the literature.
volgende artikel Hesitancy to Return to the Pre-pandemic Routine

Titel
Dysfunctional Attitudes as a Mediator in the Association Between Problematic Internet Use and Depression, Anxiety, and Stress
Auteurs
Hatice Odacı
Özkan Çıkrıkçı 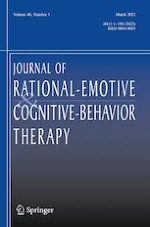 The Relationship Between Mindfulness and Happiness in Student-Athletes: The Role of Self-Compassion—Mediator or Moderator?

Hesitancy to Return to the Pre-pandemic Routine