The aim of the present study was to investigate agreement between child–parent proxy reports on quality of life (QoL) in children with specific learning disabilities (SpLD) and in a control group of typically developing children.

One hundred and sixteen children aged 8–14 years with SpLD, and 312 same age typically developing children with their parents (one or both), respectively, completed the child and parent versions of the KINDLR questionnaire. Values were analyzed with ANOVA and intra-class correlation coefficient (ICC).

Significant mean differences were found between children with SpLD and their mother’s proxy ratings. So, mothers reported significantly lower scores in the dimension of everyday functioning in school, but significantly higher scores regarding the child’s physical and emotional well-being. For typically developing children, significant differences between children and parents’ proxy ratings were found in physical well-being and self-esteem with both parents reporting higher scores. Concerning ICC, correlations were few and low in the SpLD group but more robust in the typically developing child–parent proxy ratings with values ranging from 0.22 to 0.46.

In the case of SpLD, the child’s problem area, which is reflected in the KINDLR dimension of everyday functioning in school, seems to be an issue of controversial value that may be differentially perceived by children and their mothers. Further, it can be argued that as mothers seemed to perceive in a more negative way the child’s QoL at school, they were at the same time attempting to counterbalance their reactions by overestimating the child’s physical and emotional well-being. Besides differences, there is a tendency even low for mothers and children with SpLD to converge toward similar perceptions regarding the child’s physical and emotional well-being and satisfaction with friends that is showing some rather common understanding of the child’s overall well-being and his/her relationships with peers. In the control group, agreement between children and parents seems to be more even and evident. Proxy assessments in children with SpLD and their parents may be useful for planning targeted support interventions for these families. 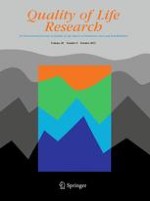 Children and adolescents’ health-related quality of life in relation to eczema, asthma and hay fever: results from a population-based cross-sectional study