Discrepancies in multi-informant reports of parenting practices represent a meaningful clinical construct that can be harnessed to predict adolescent mental health outcomes and shed light on the nature of parent-adolescent relationships. To date, however, no research has sought to examine discrepancies in perceptions of parenting practices among adolescents with histories of substance use disorders, a population for whom supportive parenting is a critical protective factor during the recovery process. This study examined parent-adolescent informant discrepancies of parenting practices and their associations with externalizing and internalizing symptomology among a sample of adolescents with substance use disorder histories. Data were analyzed from 294 adolescents (M adolescent age = 16 years; 45% female, 72% white) and their parents (87% female, 83% white) from a larger longitudinal study. Parenting practices of interest were positive parenting, inconsistent discipline, and poor monitoring. Polynomial regression analyses were used to test the discrepancy hypotheses. The results generally suggested null associations between single informant reports and internalizing and externalizing symptoms. Discrepancies were noted, however, in multi-informant reports of positive parenting, such that higher levels of adolescent-reported positive parenting were associated with higher levels of internalizing symptoms at high (but not low) levels of parent-reported positive parenting. Similarly, discrepancies were noted in multi-informant reports of poor monitoring, such that lower levels of adolescent-poor monitoring were associated with higher externalizing symptoms at low levels of parent-reported poor monitoring. The findings are discussed in terms of research and clinical implications of collecting and utilizing multi-informant data among clinical samples of adolescents with unique risk profiles.
vorige artikel How Do Adolescents Manage Information in the Relationship with Their Parents? A Latent Class Analysis of Disclosure, Keeping Secrets, and Lying
volgende artikel Longitudinal Associations between Parental Support and Parental Knowledge on Behavioral and Emotional Problems in Adolescents 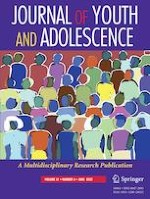 Irritability, Defiant and Obsessive-Compulsive Problems Development from Childhood to Adolescence