A. Mathur is a member of the ESC CARE Working Group and has conducted clinical research in this area.
Open Access This article is distributed under the terms of the Creative Commons Attribution 4.0 International License (http://​creativecommons.​org/​licenses/​by/​4.​0/​), which permits unrestricted use, distribution, and reproduction in any medium, provided you give appropriate credit to the original author(s) and the source, provide a link to the Creative Commons license, and indicate if changes were made.
vorige artikel Prevalence and cardiac phenotype of patients with a phospholamban mutation
volgende artikel Use, timing and outcome of coronary angiography in patients with high-risk non-ST-segment elevation acute coronary syndrome in daily clinical practice: insights from a ‘real world’ prospective registry
share
DELEN 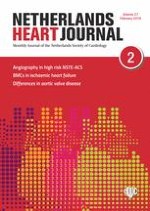 Correction to: Cardiovascular causes of sudden unexpected death in children and adolescents (0–17 years)

Differences at surgery between patients with bicuspid and tricuspid aortic valves