The aim of the study was to develop a cross-cultural adaptation and to evaluate the validity and reliability of a Spanish version of the Quality of Life in Late-Stage Dementia (QUALID) scale.

Observational and cross-sectional validation study. The QUALID was translated according to standardised procedures. Internal consistency was assessed using Cronbach’s alpha. The QUALID structure was assessed using a Principal Component Analysis (PCA). Inter-respondent (one rater asking two respondents) and inter-rater (two raters asking one respondent) reliability was assessed using the Intraclass Correlation Coefficient (ICC). The criterion validity (concurrent) was assessed by Spearman’s correlation between the QUALID score and the QoL-Visual Analogue Scale (QoL-VAS) score. The construct validity (convergent) was assessed by Spearman’s correlations between QUALID score and scores on the Pain-Visual Analogue Scale (Pain-VAS), on the Mini-Mental State Examination (MMSE) and on the Neuropsychiatric Inventory-Nursing Home (NPI-NH).

A total of 160 elderly residents and 152 respondents at 8 long-term care centres in the province of Girona (Spain) participated in the study. Results showed satisfactory levels of internal consistency (Cronbach’s α coefficients 0.74) and evidenced the multidimensionality of the scale. Three factors were identified (behavioural signs of discomfort, behavioural signs of social interaction and signs of negative affective mood). Acceptable inter-respondent reliability (ICC = 0.74) and high inter-rater reliability (ICC = 0.95) were found. The QUALID score was associated with the QoL-VAS score, suggesting a good concurrent criterion validity, and also with the Pain-VAS, the MMSE and the NPI-NH scores, suggesting good construct validity.

Our evaluation of the psychometric properties of the Spanish version of the QUALID indicates that it is a reliable and valid instrument with an adequate capacity to distinguish between different clinical status. 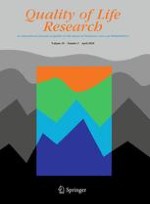 Are youth BMI and physical activity associated with better or worse than expected health-related quality of life in adulthood? The Physical Activity Longitudinal Study

Relationship of quality of life to dispositional optimism, health locus of control and self-efficacy in older subjects living in different environments

Initial development of the Temporary Utilities Index: a multiattribute system for classifying the functional health impact of diagnostic testing