To determine the frequency, characteristics and risk factors of cardiac device infections in the Isala Hospital.

Standardly, device procedures were performed in the cathlab; however, when submuscular device implantations were planned, or procedures were under general anaesthesia, the operating room was used. All patients who underwent cardiac device procedures were treated with prophylactic antibiotics (cefazolin 1 gram intravenously) 1 h before and 3 h after the procedure. At the discretion of the operator, antibiotic treatment was continued with oral clindamycin (mostly in device revisions). We reviewed all cases of cardiac device infection between 1 January 2010 and 31 December 2011. Cases were identified from a retrospectively studied prospective registry including all patients who underwent a cardiac device procedure in the Isala in Zwolle, the Netherlands. There were no exclusion criteria. Independent research assistants registered pre-defined data in an electronic research form. These data included age, sex, known risk factors for cardiac device infections such renal insufficiency, number of leads, type of device, time after device procedure and number of device procedures. Patients were followed according to the standard routine at the outpatient clinic, 6–8 weeks after device procedure, and at 6-month intervals thereafter, or more frequently when deemed necessary. Generally, cardiac resynchronisation therapy and ICDs were monitored in the Isala, and not in the referring centre. If controls were performed in a referral centre, we obtained information regarding the patient from that referring centre. A thorough screening of the medical files was performed in all cases. The diagnosis of cardiac device infection was based on the combination of suspected clinical history, signs of pocket infection on physical examination, and with transthoracic and/or transoesophageal echocardiography where appropriate. A second physician specialised in cardiac device implantations (e.g. a cardiac electrophysiologist) validated the diagnosis. In all cases blood cultures were taken. When a device infection was present, e.g. a pocket infection or device-related endocarditis, the standard treatment was to remove all device material and aggressively treat the patient with culture-guided intravenous antibiotics for a period of 2–6 weeks (depending on the type of infection). Lead extraction was performed using a standard stepwise approach in all patients. After leads were dissected free from the scar tissue in the pocket, the anchor sleeves were removed and the active fixation mechanism was retracted. After that, controlled manual traction was attempted. If the lead could not be easily removed, then an appropriately sized locking stylet (Liberator Universal locking stylet, Cook Vascular, USA) was placed, and a silk suture was tied around the lead to bind the insulation to the conductors and to keep the insulation from bunching in front of the sheath. Controlled manual traction was again attempted with the locking stylet in place, making sure not to disrupt the lead integrity. If still unsuccessful a hand-powered mechanical rotational dilator Evolution sheath was used. All patients requiring this sheath underwent the procedure under general anaesthesia supervised by a cardiac anaesthesiologist, and with continuous transoesophageal echocardiographic monitoring. We did not use Laser when requiring a powered extraction tool. When lead vegetations with a magnitude of > 3 cm or valvular endocarditis were present, the open chest procedure was performed with the cardiothoracic surgeon in the operating room. Cultures were systematically obtained from the blood and the device pocket during extraction. If re-implantation of a new device was performed, this took place on the contralateral side and at least one week after the last negative blood culture. Pacing-dependent patients received a temporary pacemaker via the contralateral jugular vein when a percutaneous lead extraction was performed, or epicardial leads when surgery had to be performed to remove all device-related material.

Our present study shows that the incidence of cardiac device infection in our hospital is 1.5 %, and is mainly caused by skin-related bacteria. Risk factors associated with device infection are device revision (e.g. generator change) and number of pacemaker leads.
The reported rate of cardiac device infection throughout the world ranges between 0.8–5.8 % [7‐9]. At 1.5 %, the reported frequency in our hospital is relatively low. Possibly, the aggressive protocol for periprocedural prophylactic antibiotics in patients at high risk for device infection (mainly in patients with device revisions with additional lead placement, or when procedure durations were longer than 3 h) could have contributed to this. In general, the high level of experience of operating physicians is associated with lower rates of infection. The true infection rate might be even lower, because 13/31 patients had a primary implantation in the referring hospital.
The reported 30-day mortality rate in our study was as low as 3.2 % and 1 year all-cause mortality rates were similar to patients without device infection. Again, mortality rates were lower in our present report, in comparison with other reports, which had mortality rates of 7.4–23 % [3, 10‐12]. In these reports, however, only 8–41 % of patients underwent complete removal of the device and leads [11, 12]. Thus, our lower mortality rate could be caused by our aggressive approach of fast and complete system removal, preferably percutaneously, with aggressive and prolonged antibiotic treatment. The current European Society of Cardiology guidelines support this practice [13].
Risk factors for device infection were device revision and left ventricular lead placement. In our present report, this was the case in pacemakers but not in ICDs. We had expected that in both groups, a higher number of leads would be related to device infection, mainly because of the procedure duration. Differences in clinical characteristics of pacemaker versus ICD patients could be of influence in explaining this unexpected finding in our present report. Unfortunately, we could not perform multivariate analysis correcting for confounders, due to the low number of endpoints. The exact relation can therefore not be extracted from our database, and to refrain from hypothetical discussion, we decided not to speculate on this. Most previous reports indicate that a higher number of previous device procedures is one of the most important risk factors for device infection. Additionally, procedure time, pocket haematoma, procedure duration, renal dysfunction, low body mass index, diabetes and steroid use have been reported as risk factors [5, 14, 15]. It is at present unknown if prolonged use of prophylactic antibiotics in patients at high risk for device infection reduces the rate of device infection. Recently, an antibacterial envelope placed around the device generator in the pocket was developed, possibly further reducing infection rates [16].
In our present study, no significant difference was seen in cardiac device infection rate between device procedures that were performed in the catheterisation lab and the operating room. This is supported by the observations by Sohail et al. [15]. Possibly, this can be explained by the fact that most device infections are caused by skin-related micro-organisms, and could be introduced during the postoperative period, or thereafter. Most device infections were caused by Staphylococcus species commonly found on the human skin. Caution is needed with interpretation of the device and lead cultures, since there is a chance of contamination which might have led to false-positive cultures. There was an early infection rate (e.g. <1 month) of 23 %. It is likely that early infection is caused by primary contamination during the device procedure or in the directly following period. For the device infections that occur in a later time frame, it is not always easy to determine the cause of the infection. In one patient, in this study, device infection occurred after elective surgery for varicose veins. Iatrogenic causes of infection play a role in device infection, but it would be hard to lower the rate of this since it is common practice to give patients prophylactic antibiotics for most surgical procedures.

A major limitation is that we retrospectively analysed our database from a single centre. Since patients were followed once per 6 months, and we did not actively search for possible device infections between the regular follow-up visits, we could have missed possible patients with a device infection with symptoms not severe enough for the patient to attend to the hospital. Not all clinical variables were available for analysis (e.g. duration of the procedure and incidence of pocket haematoma), precluding the possibility to find associations of these variables with device infection. Another limitation is the fact that we compared two groups that were possibly not comparable at baseline due to the retrospective design of the study.

We report relatively low numbers of device infection incidence, and low mortality rates when patients are prophylactically treated with antibiotics and, in case of an infection, treated aggressively. Risk factors for device infection were device revision and placement of left ventricular leads, and were mainly caused by skin-related bacteria.
Funding
None.
Conflict of interest
None declared.
Open AccessThis article is distributed under the terms of the Creative Commons Attribution License which permits any use, distribution, and reproduction in any medium, provided the original author(s) and the source are credited.
vorige artikel The ethnicity-specific association of biomarkers with the angiographic severity of coronary artery disease
volgende artikel The risk of ventricular arrhythmias in a Dutch CRT population: CRT-defibrillator versus CRT-pacemaker
insite
INHOUD
share
DELEN 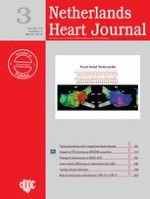 Tooth brushing for a longer and healthier life

Erratum to: Echocardiography and cardiac resynchronization therapy, friends or foes?