Change in health status and mortality as indicators of outcomes: comparison between the Medicare Advantage Program and the Veterans Health Administration | mijn-bsl Skip to main content
TOOLBAR 1 2 3 4
ZOEKEN MENU 1 2 3 4

Comparing health outcomes with adequate methodology is central to performance assessments of health care systems. We compared the Medicare Advantage Program (MAP) and the Veterans Health Administration (VHA) with regard to changes in health status and mortality.

We used the Death-Master-File for vital status and the Short-Form 36 to determine physical (PCS) and mental (MCS) health at baseline and at 2 years. We compared the probability of being alive with the same or better (than would be expected by chance) PCS (or MCS) at 2 years and mortality, while adjusting for case-mix. Given the geographic variations in MAP enrollment, we did a regional sub-analysis.

With the use of appropriate methodology, we found small differences in 2-year health outcomes that favor the VHA. 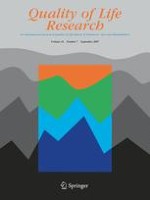 How can quality of life researchers make their work more useful to health workers and their patients?

Measuring quality of health care from the user’s perspective in 41 countries: psychometric properties of WHO’s questions on health systems responsiveness