This study examined the ability of a Virtual Reality (VR) environment to elicit the physiological and subjective arousal typically associated with public speaking. Using 21 adults with Social Anxiety Disorder (SAD) and 24 adults with no disorder, this study had three objectives: (a) to determine whether speaking to a virtual audience elicited significant increases in physiological response (e.g., heart rate, electrodermal activity, and respiratory sinus arrhythmia) and subjective distress over baseline resting conditions (b) to determine if individuals with SAD had a greater increase in physiological arousal and subjective distress when speaking in front of a live audience vs. the virtual environment and (c) to determine whether individuals with SAD had greater changes in physiological and self-reported arousal during each speech task compared to controls. All participants gave an impromptu speech in front of an in vivo and VR audience while measures of physiological arousal and self-reported distress were obtained. Results demonstrated that the VR task elicited significant increases in heart rate, electrodermal activity, and respiratory sinus arrhythmia, and self-reported distress over baseline conditions but was less anxiety-producing than the in vivo speech task. In addition, participants reported a moderate level of presence in the VR task, but significantly less than in the in vivo task. No group differences were found on physiological measures. Clinical implications of these findings and the role of VR in the treatment of SAD are discussed. 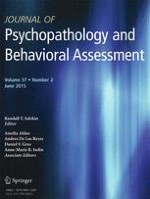 A Comparison of Three Brief Depression Measures in an Acute Psychiatric Population: CES-D-10, QIDS-SR, and DASS-21-DEP