The efficacy and side effects of buspirone compared with methylphenidate (MPH) in the treatment of children with attention-deficit/hyperactivity disorder (ADHD). A total of 34 children with ADHD as defined by DSM-IV-TR were randomized to buspirone or methylphenidate dosed on weight-adjusted basis at buspirone (0.5 mg/kg/day) and methylphenidate (0.3–1 mg/kg/day) for a 6-week double-blind clinical trial. The principle measures of outcome were the teacher and parent ADHD Rating Scale. The side effects were assessed by the special side effect checklist of each drug. In both groups, the scores of teacher and parent ADHD Rating Scale significantly declined on the 6th week as compared to baseline (p = 0.001). These effects were observed in the subscales too. No significant differences were observed between the two protocols on the total scores of parent and teacher ADHD Rating Scale, but methylphenidate was superior to buspirone in decreasing the symptoms of inattention. The side effects of buspirone were mild and rare in comparison with MPH. Buspirone has a favorable side-effects profile. It also has clinically and statistically significant impacts on improving the ADHD symptoms in children. These preliminary findings of the efficacy of buspirone in children with ADHD need large and cross-over studies. 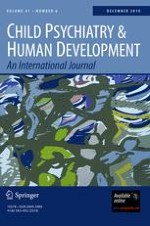 Normative Data on Anxiety Symptoms on the Multidimensional Anxiety Scale for Children in Taiwanese Children and Adolescents: Differences in Sex, Age, and Residence and Comparison with an American Sample

Parental Contributions to Child Anxiety Sensitivity: A Review and Recommendations for Future Directions

Posttraumatic Stress Disorder in Children and Adolescents: A Review of Psychopharmacological Treatment

Mother–Child Attachment Patterns and Different Types of Anxiety Symptoms: Is There Specificity of Relations?

Clinical Correlates of Comorbid Obsessive–Compulsive Disorder and Depression in Youth