Humans can guide their actions toward the realization of their intentions. Flexible, rapid and precise realization of intentions and goals relies on the brain learning to control its actions on external objects and to predict the consequences of this control. Neural mechanisms that mimic the input–output properties of our own body and other objects can be used to support prediction and control, and such mechanisms are called internal models. We first summarize functional neuroimaging, behavioral and computational studies of the brain mechanisms related to acquisition, modular organization, and the predictive switching of internal models mainly for tool use. These mechanisms support predictive control and flexible switching of intentional actions. We then review recent studies demonstrating that internal models are crucial for the execution of not only immediate actions but also higher-order cognitive functions, including optimization of behaviors toward long-term goals, social interactions based on prediction of others’ actions and mental states, and language processing. These studies suggest that a concept of internal models can consistently explain the neural mechanisms and computational principles needed for fundamental sensorimotor functions as well as higher-order cognitive functions. 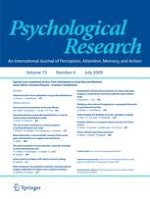 Understanding the flexibility of action–perception coupling