The biased-competition theory of attention proposes that objects compete for cortical representation in a mutually inhibitory network; competition is biased in favor of the attended item. Here we test two predictions derived from the biased-competition theory. First we assessed whether increasing an object’s relative brightness (luminance contrast) biased competition in favor of (i.e., prioritized) the brighter object. Second we assessed whether increasing an object’s size biased competition in favor of the larger object. In fulfillment of these aims we used an attentional capture paradigm to test whether a featural singleton (an item unique with respect to a feature such as size or brightness) can impact attentional priority even when those features are irrelevant to finding the target. The results support the prediction that a singleton with respect to luminance contrast receives attentional prioritization and extend the biased-competition account to include size contrast, because a large singleton also receives attentional prioritization. 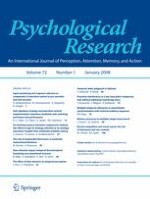