The present study investigated the influence of semantic information on overt attention. Semantic influence on attentional capture and hold mechanisms was explored by measuring oculomotor correlates of the reaction time (RT) and accuracy advantage for faces in the change detection task. We also examined whether the face advantage was due to mandatory processing of faces or an idiosyncratic strategy by participants, by manipulating preknowledge of the object category in which to expect a change. An RT and accuracy advantage was found for detecting changes in faces compared to other objects of less social and biological significance, in the form of greater attentional capture and hold. The faster attentional capture by faces appeared to overcompensate for the longer hold, to produce faster and more accurate manual responses. Preknowledge did not eliminate the face advantage, suggesting that faces receive mandatory processing when competing for attention with stimuli of less sociobiological salience. 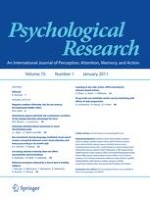 Referred sensations induced by a mirror box in healthy subjects