People with trichotillomania often have persistent negative beliefs about giving into one’s habit. Central in the present study was the hypothesis that the follow-up effects of cognitive therapy (CT), in which these negative beliefs are directly addressed, are better compared to the follow-up effects of behaviour therapy (BT). Fifty-six trichotillomania patients were randomly assigned to either six sessions CT or BT. Forty-eight completed their treatment. Follow-up measurements took place after a 3 months treatment-free period, and at 12 and 24 months. CT and BT both resulted in clear reductions of trichotillomania symptoms (severity, urge, inability to resist, and negative beliefs) immediately after treatment. There were no differences between the groups. Following the treatment-free period, there was a reoccurrence of symptoms. In contrast to our expectation, we failed to show that CT compared to BT resulted in lower relapse rates after the treatment-free period. 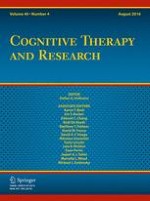 Associations Between Interpretation Bias and Depression in Adolescents