Despite demonstrated efficacy of behavioral and cognitive techniques in treating the impact of tinnitus (constant ringing in the ears), little is known about the mechanisms by which these techniques achieve their effect. The present study examined acceptance of tinnitus as a potential mediator of treatment changes on global tinnitus severity in internet-delivered acceptance and commitment therapy (iACT) and internet-delivered cognitive behavior therapy (iCBT). Data from 67 participants who were distressed by tinnitus and who were randomly assigned to 1 of the 2 treatments were analyzed using a multilevel moderated mediation model. We predicted that acceptance as measured with the two subscales of the tinnitus acceptance questionnaire (i.e., activity engagement and tinnitus suppression) would mediate the outcome in iACT, but not in iCBT. Results provided partial support to the notion that mediation was moderated by treatment: tinnitus suppression mediated changes in tinnitus severity in iACT, but not in iCBT. However, inconsistent with the view that the treatments worked through different processes of change, activity engagement mediated treatment changes across both iACT and iCBT. Acceptance is identified as a key source of therapeutic change in behavioral-based treatments for tinnitus. 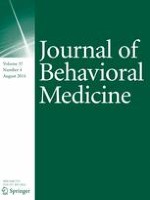 C-reactive protein is elevated in atypical but not nonatypical depression: data from the National Health and Nutrition Examination Survey (NHANES) 1999–2004