publish
Publiceer nu
insite
ZOEKEN
A previously healthy 57-year-old male presented at the emergency department (ED) with sudden onset of dizziness followed by nausea. Episodes lasted for approximately 10 min and resolved spontaneously. At the ED, while the patient was asymptomatic, clinical (including neurological) examination, laboratory test, electrocardiogram and echocardiography were normal. He suddenly experienced dizziness while the electrocardiogram showed sinus rhythm with 2:1 atrioventricular (AV) block (Fig. 1). The patient was diagnosed with symptomatic Mobitz type II AV block and was admitted for pacemaker implantation. On the ward he again experienced dizziness but now accompanied by neurological symptoms, i.e. ataxia, nystagmus, miosis and ptosis. Urgent cerebral computed tomography angiography showed an acute occlusion of the left-sided posterior inferior cerebellar artery (PICA) (Fig. 2). He was treated with thrombolysis, recovered well and AV block was not recorded anymore. Thereafter, magnetic resonance imaging (Fig. 3) revealed a large infarcted area related to the PICA.
×
×
×
Conduction disturbances, caused by autonomic dysregulation, are uncommon during acute ischaemic stroke, but can be seen in lateral medullary syndrome (Wallenberg or PICA syndrome) [1, 2].

R. Eerdekens and L.M. Rademakers declare that they have no competing interests.
Open Access This article is licensed under a Creative Commons Attribution 4.0 International License, which permits use, sharing, adaptation, distribution and reproduction in any medium or format, as long as you give appropriate credit to the original author(s) and the source, provide a link to the Creative Commons licence, and indicate if changes were made. The images or other third party material in this article are included in the article’s Creative Commons licence, unless indicated otherwise in a credit line to the material. If material is not included in the article’s Creative Commons licence and your intended use is not permitted by statutory regulation or exceeds the permitted use, you will need to obtain permission directly from the copyright holder. To view a copy of this licence, visit http://​creativecommons.​org/​licenses/​by/​4.​0/​.
vorige artikel R on the side of caution
volgende artikel R on the side of caution
share
DELEN 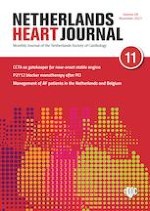 Contemporary management of patients with atrial fibrillation in the Netherlands and Belgium: a report from the EORP-AF long-term general registry

R on the side of caution