The long-term outcomes for adolescents who struggle in first-year university remain unexplored. This 7-year longitudinal study aimed to identify distinct groups of adolescents based on their characteristics/behaviors in first-year university, and then assess whether these groups differ in psychosocial adjustment trajectories (i.e., mental health, positive relationships) throughout the emerging adult period, as well as in graduation rates, employment characteristics, and reflections on time spent at university. Participants (N = 1017; 71% female; Year 1 Mage = 19 years) enrolled in a Canadian university completed a survey annually for 7 years. Four groups in Year 1 were identified: Good Students who exhibited no difficulties; Sensation-Seeking who prioritized social engagement and substance use over academic engagement but reported no psychological adjustment difficulties; Struggling Students who had the most difficulties; and Club Involved who exhibited high club involvement. The Struggling Students Group continued to have more psychosocial adjustment difficulties than the other groups during and after university, were more likely to drop out of university, and to later have less job satisfaction. This group requires the most support. Consideration also should be given to the Sensation-Seeking Group, as they reported a lack of academic motivation (and regret about that later) and also were more likely to drop out of university. At the same time, they may be more difficult to target given that they did not report psychosocial difficulties. Overall, the findings highlight the need for early support and discourage a ‘one-size fits all’ method for promoting psychosocial adjustment. 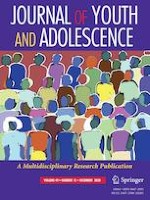 Executive Control in Early Childhood as an Antecedent of Adolescent Problem Behaviors: A Longitudinal Study with Performance-based Measures of Early Childhood Cognitive Processes

Changes in Turkish- and Resettler-origin Adolescents’ Acculturation Profiles of Identification: A Three-year Longitudinal Study from Germany