This study aimed to compare the measurement properties of EQ-5D-3L(3L) and EQ-5D-5L(5L) in patients with acute myeloid leukemia (AML) in China.

The current study found both 3L and 5L to be suitable for use in AML patients. However, 5L showed superior measurement properties compared to 3L. Thus, 5L could be the preferred instrument over 3L for use in AML patients.
vorige artikel Comparing EQ-5D-3L and EQ-5D-5L performance in common cancers: suggestions for instrument choosing
volgende artikel Obtaining EQ-5D-5L utilities from the disease specific quality of life Alzheimer’s disease scale: development and results from a mapping study 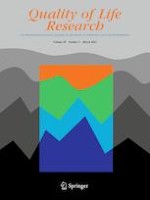 Health-related quality of life and associated factors among patients with epilepsy at the University of Gondar comprehensive specialized hospital, northwest Ethiopia