This paper examines whether severity of depression reduces or intensifies the relationship between friends’ suicide attempt and adolescent's own attempt to commit suicide, and whether there are gender differences in this interrelationship. Using logistic regression and data from a nationally representative sample of adolescents studied at 2 points in time, this study yielded significant findings. First, friends’ suicide attempt and adolescent depression each predicts adolescent's own attempt to commit suicide, and these effects are similar for both boys and girls. Second, highly depressed adolescents are less likely than low- or nondepressed adolescents to attempt suicide when their friends attempt suicide, and this relationship is observed mainly among adolescent boys. Finally, for adolescent girls, depression reduces the relationship between friends’ suicidal attempt and adolescent's own attempt but this effect is not statistically significant. These results are discussed in light of their theoretical importance and policy implications.
vorige artikel Interpersonal Sensitivity, Romantic Stress, and the Prediction of Depression: A Study of Inner-City, Minority Adolescent Girls 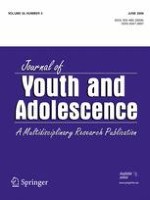