A total of 84 participants (86% men; mean age 40) were recruited. The questionnaires were completed on average 5 days, 6 weeks and 6 months after surgery and compared for internal consistency, convergent validity, sensitivity to change and floor and ceiling effects.

For this patient population, our findings indicated that the EQ-5D was more consistently responsive to change over time, as a utility index was better at distinguishing differences between groups and reflected the results of the joint-specific HCQ for knee recovery better than the SF-6D. It is therefore recommended that for similar populations, the EQ-5D is preferable to the SF-6D for utilisation alongside the HCQ. 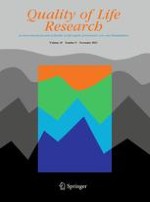 Predictors of quality of life in type 2 diabetes patients with schizophrenia, major mood disorder, and without mental illness