The relationship between gender, social support, and health-related quality of life in a community-based study in Washington County, Maryland | mijn-bsl Skip to main content
ZOEKEN MENU 1 2 3 4

Men tend to report higher health-related quality of life (HRQOL) than women of the same age, despite higher mortality rates and lower life expectancy. Social support is one factor related to HRQOL that may contribute to the observed gender difference. The purpose of this study was to determine the factors associated with HRQOL, especially levels of social support, and variation by gender.

The results showed that men reported significantly better HRQOL than women. Men reported having higher levels of social support than women, but the magnitude of the association with HRQOL was similar. Having two or less close friends was associated with a statistically significant increase in the odds of reporting poorer HRQOL compared to having 10 or more close friends among both genders (men: OR = 1.49; women: OR = 1.53). Differences in the level of social support did not explain the gender difference in HRQOL.

Our findings show that social support is an important correlate of HRQOL for both men and women. However, the gender differences in HRQOL are not explained by social support or the other factors examined.
vorige artikel The OVIS study: health related quality of life measured by the EORTC QLQ-C30 and -BR23 in German female patients with breast cancer from Schleswig-Holstein
volgende artikel Low level of quality of life in patients with mental and behavioral disorders wanting complementary and alternative (kampo) therapy 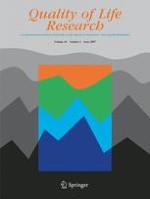 Issues in conducting cross-cultural research: implementation of an agreed international protocol designed by the WHOQOL Group for the conduct of focus groups eliciting the quality of life of older adults

The OVIS study: health related quality of life measured by the EORTC QLQ-C30 and -BR23 in German female patients with breast cancer from Schleswig-Holstein

Field testing of a European quality of life instrument for children and adolescents with chronic conditions: the 37-item DISABKIDS Chronic Generic Module

Does an informative video before inguinal hernia surgical repair influence postoperative quality of life? Results of a prospective randomized study