The Process of Science: A Critical Evaluation of more than 15 Years of Research on Self-Compassion with the Self-Compassion Scale | mijn-bsl Skip to main content
TOOLBAR 1 2 3 4
ZOEKEN MENU 1 2 3 4

Falsification is regarded as a cornerstone of science. Anomalous data—even when highly credible—do not always lead to an adjustment of theory. In this paper, we discuss reasons for why current theories are not modified despite a corpus of work falsifying (parts of) the theory, using the case of self-compassion as an example. During more than 15 years, this psychological construct has been heralded as a protective factor against stress and emotional adversity.

A search in the Web of Science database using [SELF-COMPASSION in title] as the search term was conducted and found empirical papers were critically evaluated.

Good evidence abounds indicating that the theoretical definition of self-compassion is limited and that as a consequence its proper assessment with the Self-Compassion Scale (SCS) is obscured as the measure is contaminated by psychopathological characteristics. Surprisingly, few researchers take these critical notes into account when conducting and reporting new studies on this topic. We argue that this might be due to all kinds of (conscious and unconscious) tendencies and cognitive biases of researchers and clinicians.

Research lines are not always guided by solid data but strongly determined by social factors. We close by providing a recommendation for researchers regarding the assessment of self-compassion including the continued use of the SCS.

Titel
The Process of Science: A Critical Evaluation of more than 15 Years of Research on Self-Compassion with the Self-Compassion Scale
Auteurs:
Peter Muris
Henry Otgaar 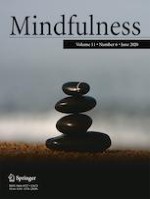 Somatics of Early Buddhist Mindfulness and How to Face Anxiety