The Development of Criminal Style in Adolescence and Young Adulthood: Separating the Lemmings from the Loners | mijn-bsl Skip to main content
TOOLBAR 1 2 3 4
ZOEKEN MENU 1 2 3 4

Despite broad consensus that most juvenile crimes are committed with peers, many questions regarding developmental and individual differences in criminal style (i.e., co-offending vs. solo offending) remain unanswered. Using prospective 3-year longitudinal data from 937 14- to 17-year-old serious male offenders, the present study investigates whether youths tend to offend alone, in groups, or a combination of the two; whether these patterns change with age; and whether youths who engage in a particular style share distinguishing characteristics. Trajectory analyses examining criminal styles over age revealed that, while most youth evinced both types of offending, two distinct groups emerged: an increasingly solo offender trajectory (83%); and a mixed style offender trajectory (17%). Alternate analyses revealed (5.5%) exclusively solo offenders (i.e., only committed solo offenses over 3 years). There were no significant differences between groups in individuals’ reported number of friends, quality of friendships, or extraversion. However, the increasingly solo and exclusively solo offenders reported more psychosocial maturity, lower rates of anxiety, fewer psychopathic traits, less gang involvement and less self reported offending than mixed style offenders. Findings suggest that increasingly and exclusively solo offenders are not loners, as they are sometimes portrayed, and that exclusively solo offending during adolescence, while rare and previously misunderstood, may not be a risk factor in and of itself. 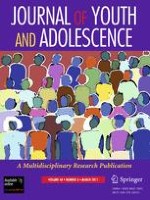 Adolescent Thriving: The Role of Sparks, Relationships, and Empowerment

The Role of Religiosity in the Relationship Between Parents, Peers, and Adolescent Risky Sexual Behavior