The Cross-Temporal Associations between Rumination Subtypes and Substance Use in Adolescence: Exploring the Moderating Role of Gender | mijn-bsl Skip to main content
ZOEKEN MENU 1 2 3 4

Several studies have linked rumination to substance use. However, only one study thus far has focused on the differential associations between the subtypes of rumination (brooding and reflection) and substance use. This previous study was cross-sectional in nature, so less is known about how these variables are related across time. To address this issue, the present three-wave longitudinal study investigated the cross-temporal associations between subtypes of rumination, alcohol consumption, drug consumption and substance use problems, using cross-lagged path analyses. In addition, the study investigated whether the cross-lagged paths of interest were moderated by gender. The sample consisted of 309 adolescents (62.1 % boys) between the ages of 13 to 20 years old (M age at T1 = 16.82 years, SD = 1.32). Results indicated that substance use problems predicted increases in levels of brooding and reflection over time. These effects were moderated by gender so that substance use problems only predicted increases in levels of brooding and reflection in girls. In contrast to our expectations, higher levels of brooding predicted a decrease in alcohol consumption over time, and this effect was not moderated by gender. Cross-lagged analyses also showed that alcohol consumption predicted an increase in substance use problems. All results emerged independently of depressive symptoms. The findings of the present study add to the growing body of literature on the associations between rumination subtypes and substance use in adolescence, and highlight the importance of using longitudinal designs to address the issue of directionality.
vorige artikel Cognitive Vulnerability to Emotional Symptoms: Reconsidering the Role of Worry and Rumination
volgende artikel A Methodological Examination of Emotion Inductions in Borderline Personality Disorder: A Comparison of Standardized Versus Idiographic Stimuli 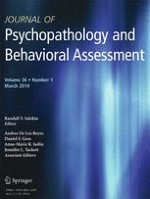 A Methodological Examination of Emotion Inductions in Borderline Personality Disorder: A Comparison of Standardized Versus Idiographic Stimuli

An Evaluation of the Two-Factor Model of Emotion: Clinical Moderators Within a Large, Multi-Ethnic Sample of Youth

Some New Directions for Publication in the Journal of Psychopathology and Behavioral Assessment: New Constructs, Physiological Assessment, Worldwide Contribution, and Economics