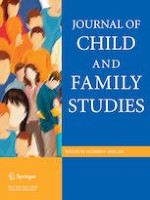 Getting into the “Dad Zone”: How Do Primary Caregiving Fathers of Young Children Experience Social Support?