(1) To assess the responsiveness of the Short Form 36 Health Survey (SF-36) and Patient Generated Index (PGI) in people with knee pain who were given oral analgesics; and (2) to perform content analysis of the SF-36 and PGI aiming to identify differences between the instruments and causes of different responsiveness.

An observational study nested within a randomised controlled trial comparing oral paracetamol, ibuprofen or a combination of the two in 884 community-derived people with chronic knee pain. Each participant was given the SF-36 and PGI questionnaires to fill out at baseline, day 10, week 7 and week 13 after commencement on analgesia. Responsiveness was measured as a standardised response mean from baseline, and contents of the instruments were analysed.

The PGI showed the greater responsiveness to analgesics than the SF-36 throughout the study period. Only the Bodily Pain Score of the SF-36 showed comparable responsiveness to the PGI. The standardised response mean of the PGI at 13 weeks was 0.61 (95% CI 0.51–0.72), and that of the Bodily Pain Score of the SF-36 was 0.49 (95% CI 0.39–0.58). Content analysis of the PGI identified multiple areas which are not represented in the SF-36 which may help explain its performance.

Overall the PGI is more responsive than the SF-36 to commonly used oral analgesics taken for knee pain. The PGI is able to elicit areas of individualised health-related quality of life which are not captured by the SF-36. 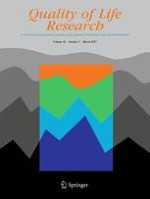 Effect of exercise on the quality of life in type 2 diabetes mellitus: a systematic review

Are intensive data collection methods in pain research feasible in those with physical disability? A study in persons with chronic pain and spinal cord injury

Functioning in patients with schizophrenia: a systematic review of the literature using the International Classification of Functioning, Disability and Health (ICF) as a reference

Are the EQ-5D-3L and the ICECAP-O responsive among older adults with impaired mobility? Evidence from the Vancouver Falls Prevention Cohort Study