Recently, we showed that the c.40_42delAGA (p.Arg14del) mutation in the phospholamban (PLN) gene can be identified in 10–15 % of Dutch patients with dilated cardiomyopathy or arrhythmogenic cardiomyopathy. The arrhythmogenic burden of the p.Arg14del mutation was illustrated by the high rate of appropriate ICD discharges and a positive family history for sudden cardiac death.

Our goal was to evaluate the geographical distribution and the origin of this specific mutation in the Netherlands and to get an estimation of the prevalence in a Dutch population cohort. Therefore, we investigated the postal codes of the places of residence of PLN p.Arg14del mutation carriers and places of birth of their ancestors. In addition, a large population-based cohort (PREVEND) was screened for the presence of this mutation.

The p.Arg14del mutation in the PLN gene is the most frequently identified mutation in Dutch cardiomyopathy patients. The mutation that arose 575–825 years ago is likely to have originated from the eastern part of the province of Friesland and is highly prevalent in the general population in the northern part of the Netherlands.

Inherited cardiomyopathies are genetically heterogeneous disorders of the heart which often develop during adolescence or early adult life [1]. Cardiomyopathies are grouped into different categories, based on their functional and morphological properties and subdivisions can be made according to the genetic basis [2, 3]. Genetic overlap between cardiomyopathies is well-recognised. Hypertrophic cardiomyopathy (HCM) is characterised by a thickened wall of the left ventricle [4], and mutations in any of nine genes encoding sarcomeric proteins can be found in 30–65 % of HCM patients worldwide [5‐7]. However, mutations in these genes can also be identified in 18 % of patients with dilated cardiomyopathy (DCM) [8], which is characterised by left ventricular dilatation and contractile dysfunction. Arrhythmogenic right ventricular cardiomyopathy (ARVC) is another cardiomyopathy subtype, characterised by fibrofatty replacement of cardiomyocytes, primarily in the right ventricle [9]. In addition to this classic right ventricular subtype, biventricular involvement and left ventricular predominance have been described [10]. ARVC is considered to be mainly a ‘disease of the desmosome’, a cell-cell adhesion complex [11]. Screening of desmosomal genes has identified mutations in 40-58 % of patients diagnosed with ARVC, but also in 5 % of patients in a DCM cohort from the United Kingdom [12‐15]. The observed clinical and genetic overlap between ARVC and DCM has led to the postulation of arrhythmogenic cardiomyopathy as the encompassing entity [16].
Of the cardiomyopathies, DCM is genetically the most heterogeneous; in addition to the sarcomere genes, more than 30 genes have been identified in DCM families [17]. One of the genes implicated in DCM encodes phospholamban (PLN), a calcium handling protein in the sarcoplasmic reticulum of cardiac muscle [18]. A number of mutations have been identified, leading to a highly variable phenotype, ranging from cardiac death in early adulthood to middle-aged asymptomatic mutation carriers [19, 20].
The yield from screening cardiomyopathy populations for PLN mutations is generally very low, ranging from 0.08 % to 0.38 % in selected cohorts [21‐25]. Surprisingly, we identified the PLN p.Arg14del mutation not only in 13 % (31/240) of Dutch patients diagnosed with DCM, but also in 12 % (12/97) of Dutch patients diagnosed with ARVC [26]. The arrhythmogenic burden of the p.Arg14del mutation was illustrated by the high rate of appropriate ICD discharges and a positive family history for sudden cardiac death. Furthermore, p.Arg14del mutation carriers more frequently underwent cardiac transplantation, compared with patients with familial DCM [26]. Cascade screening has identified dozens of family members carrying the same mutation. Both variable expression and age-dependent penetrance, which are hallmarks of all inherited cardiomyopathies, are characteristic of the p.Arg14del mutation.
Recurrent and founder mutations in the Netherlands causing cardiac disease have been described in this series of the Netherlands Heart Journal [7, 27‐30]. Here, we report our analysis of the origin of the p.Arg14del mutation, both by geographic region using postal code maps, and by age using haplotype analysis. Furthermore, we screened a large population-based cohort for the presence of the p.Arg14del mutation to get an impression of the potential number of mutation carriers in the Netherlands.

Sequencing analysis and haplotype analysis for the PLN p.Arg14del mutation has been described elsewhere [26]. To estimate the age of the haplotype, the linkage disequilibrium between the mutation and recombinant microsatellite markers was calculated and the recombination fraction from the distances between the mutation and microsatellite markers was determined, enabling estimation of the number of generations since a mutation had occurred [31].

A large population-based cohort from the city of Groningen, in the north of the Netherlands, the Prevention of Renal and Vascular ENd-stage Disease (PREVEND) cohort (N = 8,267), was screened for the presence of the PLN p.Arg14del mutation. The PREVEND study was designed to prospectively investigate the association between urinary albumin excretion and renal and cardiovascular outcome in the general population. The study protocol is described elsewhere [32, 33]. In the period 1997–1998, 8592 participants were enrolled in the study and DNA samples were available for 8267 participants. The PREVEND study was approved by the local medical ethics committee and conducted in accordance with the Declaration of Helsinki.

The prevalence of the PLN p.Arg14del mutation in the PREVEND cohort was evaluated using KASPar® PCR SNP genotyping system (KBiosciences, Herts, UK). All the 8267 available DNA samples were screened for the mutation.

The shared haplotype in a selection of PLN p.Arg14del probands is marked in grey.
For patient D12, the size of the first proximal marker (PLN−50 K) had most likely changed. For patients D12 and the one from the United States (US), either the size of the first distal marker (PLN+200 K) had changed or a recombination had occurred. The identical haplotype, found in two patients from the German pedigree published by Posch et al. [34], is also shown. Two PLN p.Arg14del mutation carriers from the Greek pedigree published by Haghighi et al. [21] carried another haplotype, as shown in the box. The position on chromosome 6 is listed. DCM indicates dilated cardiomyopathy; ARVC arrhythmogenic right ventricular cardiomyopathy.

The geographic distribution of the place of residence of the mutation carriers is plotted in Fig. 1, which shows that the majority of the identified carriers live in the northern part of the Netherlands and in the province of Noord-Holland, and that the numbers decrease gradually towards the south.
×
To determine the origin of the Dutch founder haplotype containing the PLN p.Arg14del mutation, we analysed the place of birth of the proband’s grandparents and scored the corresponding postal codes according to their chance of being the grandparent carrying the mutation. Data on these places of birth were available for 60 of the 101 probands and the results are shown in Fig. 2. We found that the majority of ancestors came from the eastern part of the province Friesland.
×
The phenotypes of PLN p.Arg14del mutation carriers vary greatly, not only between families, but also within the same family, as illustrated by the family shown in Fig. 3a and Table 2. The proband III:1 was diagnosed with ARVC at age 21. She sought medical attention after experiencing palpitations. She presented with a low-voltage ECG with ventricular bigeminy and monomorphic ventricular extrasystoles from the right ventricular outflow tract (Fig. 3b). During the course of 9 years follow-up, she developed progressive heart failure and experienced several appropriate ICD discharges because of ventricular tachyarrhythmias. She was placed on the waiting list for a cardiac transplantation, but died at age 30. Her mother, who also carried the PLN p.Arg14del mutation, had recordings of non-sustained VTs on 24 h Holter ECG monitoring, but her evaluation was otherwise unremarkable. The grandfather, also a mutation carrier, died at age 75 without ever seeking medical attention because of possible cardiac problems. The proband’s two sisters (age 30 and 27 when last evaluated) were found to be carriers of the PLN p.Arg14del mutation and are being monitored frequently, but have not experienced any symptoms, although the oldest sister demonstrated 1100 premature ventricular complexes on 24 h Holter monitoring (Table 2).
Table 2
Clinical characteristics of the family members shown in Figure 3
EPS indicates electrophysiology study; HTx cardiac transplantation; ICD implantable cardioverter defibrillator; PVC premature ventricular complex; SA-ECG signal averaged ECG; VT ventricular tachycardia. NA not available
×

We thank all the patients and their relatives who made this work possible, Hennie Bikker, Dennis Dooijes, Marielle E. van Gijn, Arjan Houweling, Jan D.H. Jongbloed, Marjon A. Slegtenhorst, and Arthur van den Wijngaard for providing results of DNA sequence analyses, and Jackie Senior for editing the manuscript.

This study was supported by a grant from the Netherlands Heart Foundation (2007B132).

None declared.
Open Access This article is distributed under the terms of the Creative Commons Attribution License which permits any use, distribution, and reproduction in any medium, provided the original author(s) and the source are credited.
vorige artikel The phospholamban p.Arg14del founder mutation in Dutch patients with arrhythmogenic cardiomyopathy
volgende artikel Remote magnetic catheter navigation: more than just bells and whistles ?
insite
INHOUD
share
DELEN 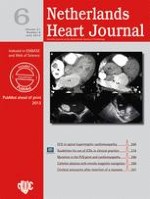 Who benefits from implantable cardioverter defibrillator therapy, and who pays the price?

Cerebral aneurysms one year after resection of a cardiac myxoma

Implementation of guidelines for implantable cardioverter-defibrillator therapy in clinical practice: Which patients do benefit?