Arterial stiffness (AS) has emerged as a strong predictor of cardiovascular (CV) diseases. Although increased AS has been described as a predictor of atrial fibrillation (AF), its role as a risk marker for AF recurrence has not yet been elucidated.

Patients with AF who underwent pulmonary vein isolation (PVI) were included in this study. Presence of AS was evaluated by measuring aortic distensibility (AD) of the descending aorta by transoesophageal echocardiography.

Atrial fibrillation (AF) is the most commonly sustained cardiac rhythm disturbance. The prevalence of this age-related condition is still increasing [1, 2]. Due to the large number of patients suffering from AF and given the limited treatment options, early detection and prevention are becoming increasingly important [3]. Although the treatment options for AF are still improving, especially interventional therapy by catheter ablation or pulmonary vein isolation (PVI), recurrences remain a major challenge.
Several predictors of recurrent AF have been identified, such as persistent AF, left atrial (LA) size or chronic kidney disease [4‐7]. These predictors are also included in the APPLE score [8], a novel score for prediction of rhythm outcome. Most factors included in the APPLE score are cardiovascular (CV) components that are associated with increased AS [9]. Arterial stiffness (AS) also increases with age and is an independent predictor of CV diseases and mortality [10]. Furthermore, an association between AS and an increased risk of new-onset AF has recently been described [11, 12].
Since AS provides information on the overall CV risk, as well as on subclinical organ damage, noninvasive methods for the assessment of AS are becoming increasingly important in prevention and risk stratification [13].
Measurement of aortic distensibility (AD) as surrogate of AS, by using transoesophageal echocardiography, permits a convenient assessment, which can be easily incorporated into clinical routine of patients with AF [14]. This method could not only be time effective but is also potentially superior to conventional risk stratification. We therefore investigated the role of AD, as a surrogate of increased AS and overall CV risk, in the prediction of recurrence of AF after PVI.

This monocentric observational trial was conducted at the First Department of Medicine (Cardiology), University Medical Centre Mannheim in Mannheim, Germany. Patients with AF who underwent PVI were included in the study. Written informed consent was obtained from all patients. Recruitment started in June 2015 and ended in December 2017. Patients were followed prospectively. Other results of this study population have been reported previously [6].
Baseline demographic and clinical characteristics were acquired from a questionnaire and patient charts. Exclusion criteria at the time of transoesophageal echocardiography were acute myocardial infarction or stroke (within past 30 days), indication for aortocoronary bypass operation, minimal heart rate at rest <50 bpm, need for pacemaker stimulation, hypotension with blood pressure <90/50 mm Hg or uncontrolled hypertension with systolic blood pressure ≥160 mm Hg, history of aortic dissection/aneurysm and history of aortic prosthesis.
The study was conducted according to the principles of the Declaration of Helsinki and was approved by the local ethics committee, the Medical Ethics Commission II, Faculty of Medicine Mannheim, University of Heidelberg, Germany. Data were analysed anonymously. Data protection was in accordance with the European Union’s Data Protection Directive.

To ensure reproducibility of AD assessment, a randomly generated set of 40 transoesophageal echocardiographic scans was analysed before study enrolment by one single experienced observer (TS-M), who was blinded to the data. Intraobserver variability for AD was determined using the calculation of intraclass correlation coefficient (ICC).

A diagnostic quadripolar electrode catheter (EP Technologies Inc., Sunnyvale, CA, USA) was positioned in the coronary sinus with a femoral vein approach. Transseptal catheterisation was performed, and systemic anticoagulation was achieved with intravenous heparin to maintain an activated clotting time of 250–350 s.
A multipolar Lasso catheter (Biosense Webster Inc., Irvine, CA, USA) was placed into the left atrium to map signals at the ostial sides of the pulmonary veins. A deflectable, quadripolar 7‑Fr catheter with 2‑5-2-mm interelectrode spacing and a 4-mm distal electrode with an embedded thermistor (EP Technologies Inc., Sunnyvale, CA, USA) was inserted into the left atrium, either through the same transseptal puncture site or through a second transseptal puncture, and was used for ablation. Bipolar and unipolar electrograms were filtered at bandpass settings of 30–500 Hz and 0.05–200 Hz, respectively, and were recorded digitally (EPMed Systems Inc., Mount Arlington, NJ, USA).
Pacing was performed from the coronary sinus or left atrium with a stimulator (Model EP‑3 Clinical Stimulator, EPMed Systems Inc., Mount Arlington, NJ, USA). Complete isolation was verified as a reduction of all signals ≤0.2 mV and by pacing manoeuvres.

Recurrence of AF after PVI, based on electrocardiographic evidence, served as primary endpoint.

Patients with AF were followed up for a median duration (interquartile, IQR) of 21 months (15.0–31.0). Periodical follow-up was performed during routine visits in our outpatient clinic. Three months after PVI, 72-hour Holter monitoring was performed.

In total, 151 patients were included in the study (mean age 71.9 ± 9.8 years, 64% male). The patients suffered from several cardiovascular comorbidities, such as hypertension (78%), diabetes mellitus (13%), chronic kidney disease (32%), coronary artery disease (29%), heart failure (43%) and obstructive sleep apnoea (13%). Stroke or transitory ischaemic attack had occurred in 12% of the patients and 18% had a history of smoking.
Concomitant medical treatment was in accordance with the 2016 ESC Guidelines for the management and treatment of atrial fibrillation [15]; 72% of the patients were taking a betablocker, 54% an angiotensin-converting enzyme inhibitor or angiotensin receptor blocker and 19% a calcium channel blocker. Statin use was observed in 41% of the patients and 7% received diabetes medication. A small proportion was on antiarrhythmic treatment with amiodarone (11%) or digitalis (9%).
Persistent AF was diagnosed in 59 patients (39%). Mean CHA2DS2-VASc score was 3.0 ± 1.7, while mean APPLE score was 1.9 ± 1.2. Prior PVI had been performed in 27 patients (18%). Hundred and thirty-five patients (89%) received anticoagulant therapy, consisting of vitamin K antagonists or direct oral anticoagulants.
Most patients had a normal systolic cardiac function (LVEF 56 ± 9%); impaired LVEF (<50%) was found in 25 patients (27%). Mean LA dimensions, both LA diameter measured by M‑mode (42 ± 7 mm) and LAVI (40 ± 16 ml/m2) were elevated and outside of the normal range [18, 22]. Mean AD was reduced (1.9 ± 1.1 × 10−3 mm Hg−1) compared with normal values [23].
Demographics, baseline characteristics and drug treatment specifics of the study population are shown in Tab. S1 in the Electronic Supplementary Material.

Our study population consisted of patients with complicated AF who were treated at a university hospital and not by a general physician, which may have led to a higher proportion of AF recurrences. On the other hand, especially in asymptomatic patients, the incidence of recurrent AF may have been underestimated. Even though Holter monitoring was performed periodically, paroxysmal episodes may not have been detected.

The current study evaluated the predictive role of AS in AF recurrence. Both AS, measured as AD, and LA size were independently positively associated with AF recurrence during follow-up. In addition, AD was significantly correlated with LA size, which leads to the assumption that increased AS promotes cardiac remodelling and hence maintains AF. For this reason, the use of AD measurements may help in the evaluation of the individual risk of AF recurrence after rhythm control therapy. However, further randomised clinical trials are needed to prove whether risk prediction by evaluating AD is not only time effective but also more accurate than conventional risk stratification. Our results should be verified in a larger and less complex patient population, in order to derive a recommendation for clinical practice.

T. Shchetynska-Marinova, M. Kranert, S. Baumann, V. Liebe, A. Grafen, S. Gerhards, S. Rosenkaimer, I. Akin, M. Borggrefe and A.L. Hohneck declare that they have no competing interests.
Open Access This article is licensed under a Creative Commons Attribution 4.0 International License, which permits use, sharing, adaptation, distribution and reproduction in any medium or format, as long as you give appropriate credit to the original author(s) and the source, provide a link to the Creative Commons licence, and indicate if changes were made. The images or other third party material in this article are included in the article’s Creative Commons licence, unless indicated otherwise in a credit line to the material. If material is not included in the article’s Creative Commons licence and your intended use is not permitted by statutory regulation or exceeds the permitted use, you will need to obtain permission directly from the copyright holder. To view a copy of this licence, visit http://​creativecommons.​org/​licenses/​by/​4.​0/​.
vorige artikel The benefit of vaccination against COVID-19 outweighs the potential risk of myocarditis and pericarditis
volgende artikel Family screening in patients with isolated bicuspid aortic valve
insite
INHOUD
share
DELEN 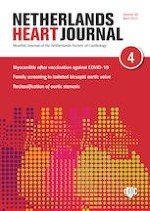 Arterial stiffness and atrial fibrillation recurrence: another risk marker or a call for better management of concomitant disease?

Atrial fibrillation and what else?