In recent years, there has been increasing interest in gender perspectives in research. In this regard, the study of gender beliefs represents a growing field which has received considerable attention due to their significant societal and psychological impact. One important challenge faced by Spanish rational emotive behavioral therapy (REBT) clinicians is the dearth of instruments developed within an REBT framework to examine women’s traditional gender beliefs. The O’Kelly women’s beliefs scale (OWBS) has been used in many countries during the last decade to measure such beliefs. However, cross-cultural studies exploring the internal structure of the scale have yielded diverse factor structures and item distributions, arguably due to the exploratory nature of the analyses conducted. To address this issue and to explore whether an REBT-consistent structure was feasible, this study evaluated the psychometric properties of the OWBS in a Spanish sample. The participants were 1075 women aged between 18 and 83 years (mean age = 34.18, SD = 14.72). A confirmatory factor analysis revealed that an REBT-consistent 8-factor solution (4 irrational and 4 rational processes) presented an excellent absolute fit (RMSEA = .043, 90% CI RMSEA = .042, .044). The results support the use of both rational and irrational factors of the Spanish adaptation of the OWBS, as well as the consideration of the four inferences that originally guided the scale’s development based on the REBT theory.
vorige artikel Coping Matters Even with Math Performance Stress: Adolescents’ Cognitive Coping with Math Performance Stress and Behavior Problems 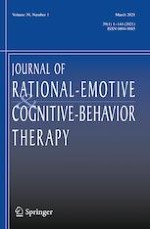 Acceptance-Based Therapies and Asian Philosophical Traditions: Similarities and Differences in the Concept of Acceptance

How are Experiential Avoidance and Cognitive Fusion Associated with Alexithymia?