To psychometrically evaluate the Satisfaction with Life Scale in two cohorts of first-episode psychosis patients in the Danish National Schizophrenia Project and in the Swedish Parachute Project.

Four properties of the Satisfaction with Life Scale were examined in the Danish cohort (explorative investigation) and then confirmed in the Swedish cohort: (1) the factor structure; (2) correlations between subscales; (3) internal consistencies of subscales; and (4) main tendencies (arithmetic means) and variations (standard deviations) of subscales. The relations between the Satisfaction with Life Scale and various life conditions were investigated in the Swedish cohort.

For both samples, the analysis indicated that the obtained four-dimensional 11-item scale had satisfactory properties. Moderately high scores were obtained in the four subscales: “living,” “social relationships,” “self and present life” and “work.” They correlated positively with each other, the internal consistencies of the subscales were acceptable and the means for the subscales indicated no apparent floor or ceiling effects. The four dimensions obtained seem relevant and presented good face validity. The dimensions were confirmed in the Swedish sample.

The Satisfaction with Life Scale shows satisfactory psychometric properties and seems valid and useful among first-episode psychosis patients.
vorige artikel Cross-cultural adaptation, reliability, and validity of the Turkish version of PedsQL 3.0 Arthritis Module: a quality-of-life measure for patients with juvenile idiopathic arthritis in Turkey
volgende artikel Evaluation of the French version of the 4-item index of the Acne-QoL (AcneQ4fr) 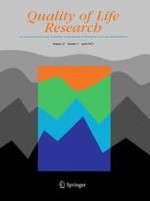 Erratum to: Environmental risk and protective factors of adolescents’ and youths’ mental health: differences between parents’ appraisal and self-reports

Reliability and validity of the Thai version of the Pediatric Quality of Life Inventory 4.0