Prioritizing positivity (PP) has been presented as an effective mechanism to increase positive emotions and reduce negative emotions. The current study sought to explore the role of age as a moderator and identify selected situations facilitating the likelihood of routinely experiencing positive and negative emotions.

This mixed methods study consisted of 604 adults between 17 and 87 years who completed prioritizing positivity (PP) scale, positive and negative affect scale (PANAS), and demographic data. Aside from the study questionnaires, a subsample of 223 participants was presented with two open questions. 1037 responses to these two questions comprised the data for content analysis.

Integrating both qualitative and quantitative findings elucidates the role of daily routine situations and activities in the management of positive and negative emotions across the lifespan. PP was shown to be of significant emotional value for younger as well as for older adults, though for different reasons. For younger adults, PP serves as a potential ’buffer’ to balance negative emotions related to daily stresses and hassles characterizing this life stage, whereas for older adults it serves as a mechanism to boost life’s little pleasures on a daily basis based on the acknowledgment of one’s limited time ahead. 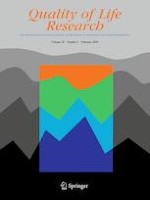 Risk factors and quality of life of patients with high diabetes-related distress in primary care: a cross-sectional, multicenter study

Association between disaster experience and quality of life: the mediating role of disaster risk perception

The effect of three exercise approaches on health-related quality of life, and factors associated with its improvement in chronic whiplash-associated disorders: analysis of a randomized controlled trial