We examined the predictors for successful discharge from out-of-home care of children with complex needs placed in a novel comprehensive service intervention (Manatee Model) and compared their discharge experiences to their out-of-home counterparts from the same county. The study design consisted of a longitudinal two-year comparison of these two groups. A total of 147 cases were included in the analysis, and the propensity scoring technique was used to equate the groups. Among children admitted to the Manatee Model, boys, White children, younger children, those who came from a single-parent family, those who were abused, and those who had a disability (physical or emotional disability or medical condition) were found less likely to successfully exit within the two years when these predictors were examined separately. Multivariate analyses indicated that only age at the time of removal and health status were significantly associated with successful discharge. Implications of the findings are discussed.
vorige artikel Mothers' Parenting and Young Economically Disadvantaged Children's Relational and Overt Bullying
volgende artikel Violence Exposure and Early Adolescent Alcohol Use: An Exploratory Study of Family Risk and Protective Factors 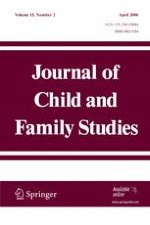 Violence Exposure and Early Adolescent Alcohol Use: An Exploratory Study of Family Risk and Protective Factors

A Level of Care Instrument for Children's Systems of Care: Construction, Reliability and Validity